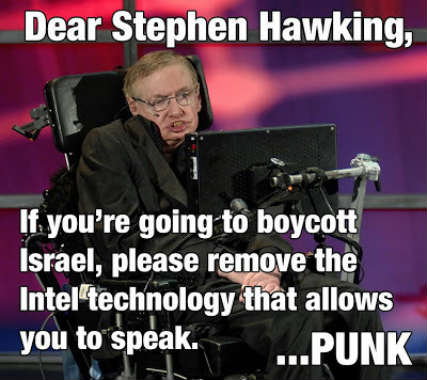 The widely commented decision of British physicist Stephen Hawking to boycott a conference in Israel attracts attention again on a piteous but persistent reality. Although unspeakable atrocities are committed every day on the planet, although civil war in Syria kills hundreds of people every week, although Iranian leaders continue to make genocidal anti-Semitic statements while pursuing their quest for nuclear weapons, those in the West who sow hatred against Israel do not disarm or abandon their sickening obsessions.

Western scientists can visit any country on earth, even the worst dictatorships, without having to explain their decision, but if they decide to visit Israel, it is different. Pressure is immediately exerted on them until they cancel their plans. American and European artists can go wherever they are invited to go, without having to justify themselves, but if they are invited to visit Israel, they will be asked immediately to think twice, and many will do it.

Simultaneously, Israeli scientists and artists who travel to the West are victims of discriminatory actions, harassment, and often aggression.

Lists of products made in Israel circulate on the internet, with intent to discourage «savvy consumers» from purchasing them.

«  Well-intentioned  » groups call for the withdrawal of funds from Israeli companies and from companies investing in Israel. Several European banks and financial institutions have already bowed to the pressure.

Today, Israel is the most vilified country on earth. It is the one nation that it is «  politically correct » to loathe and despise. And while the people who view Israel negatively remain a minority in North America, they are a large majority in every European country.

The organizers of anti-Israel campaigns use the most spurious grounds and stop at no lie to reach their sordid aims.

They speak of «  Israeli apartheid  », but are silent on the fact that the Israeli population includes nearly twenty percent of Muslims who enjoy the same rights as all other Israeli citizens (including the right to vote). They never say that Israel is the only country in the Middle East where free speech and freedom of worship exist. They never utter a single word concerning the ruthless discrimination faced by Palestinian Arabs in Jordan and Lebanon.

They talk about «  occupied territories  » and willfully falsify the history of the region. From the moment Gilad Shalit was released, not a single Israeli soldier is present in Gaza, and Gilad Shalit was in Gaza against his will. The West Bank has to this day an undefined status  : it was forcibly annexed by Jordan from 1949 to 1967, and it has been so far the subject of no final agreement.

They define Israelis living in the West Bank as «  illegal occupiers  », and forget how the West Bank was submitted to ethnic cleansing when it was under Jordanian control. In addition, they conveniently overlook that most Jews coming to settle the West Bank return to territories where Jews used to live before 1949.

They sometimes speak of «  1967 borders  », meant to separate «  Palestine  » from Israel, and pretend to ignore that there has never been «  1967 borders  », but armistice lines set out in 1949 to separate Israel and Arab countries determined to erase any Jewish presence from the Middle East. They willfully ignore that no country called «  Palestine  » has never existed anywhere on earth.

They never mention the countless speeches of Palestinian leaders advocating suicide bombings, praising Amin Al-Husseini (the closest Arab ally the  Nazis  ever had), or saying that if they had a nuke to obliterate Israel and the Israelis, they would use it immediately.

They speak about Israel’s security fence as if it had been erected out of pure sadism and «  racism », rather than to prevent fanatical people imbued with the spirit of jihad from entering Israel in order to kill Jews.

They pretend to be on the side of freedom, but coincidentally, the only country they apparently wish to destroy, is also the only country in the Middle East where political, religious and cultural freedom flourish (despite a war that has been waged relentlessly by the enemies of freedom).

They pretend to be on the side of democracy, but, coincidentally again, they demonize the only democratic country in the Middle East. The barbaric tyranny that reigns in Gaza does not seem to disturb them. The total lack of legitimacy of Mahmoud Abbas, who is in the eighth year of his four-year term does not disturb them either.

They pretend to be on the side of human rights, but they drag through the mud the only country in the region where the idea of «  human rights  » mean something. They do not seem to consider that the brainwashing of children practiced by the Hamas and the Palestinian Authority is a violation of human rights. They turn a blind eye on the fate of millions of women who, from Pakistan to Egypt, are subject to the vilest forms of humiliation and abuse.

Impostors have existed in every era.

Pretending to defend values ​​by attacking a country that, more than most others, is the bearer of these values, ​​and doing it in the name of a «  cause  » that rest on the vicious trampling of these values ​​is an absolute imposture.

The imposture in question is especially abject if one takes into account that the attacked country is the country of the Jewish people and that so many adepts of the imposture are Europeans, and therefore were born and raised on the continent where the killing of six million Jews took place a few decades ago.

The fact that these prominent scientists are systematically silent on the extraordinary scientific and technological achievements of their Israeli peers highlights that stupidity, short-sightedness, cowardice and moral ugliness can betray the scientific spirit itself.

A man like Stephen Hawking, who survives and speaks thanks to Israeli technologies seems to have become a major example of such a betrayal.

You can reproduce this article with the following mention and URL: © Guy Millière for Gatestone Institut

2 thoughts on “Incitement to hatred against Israel never stops” 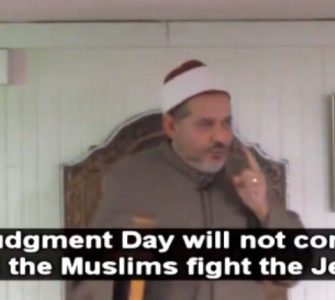