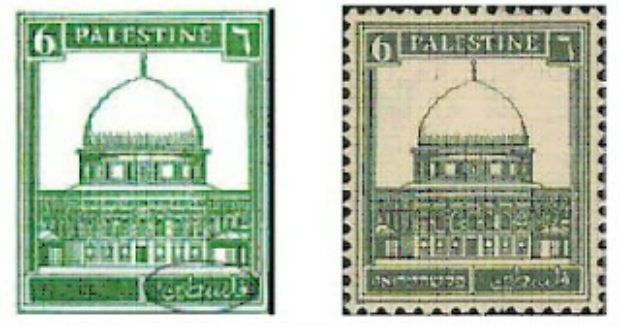 The question of Palestinian textbooks’ portrayal of Jews has been bitterly debated for years. More than a decade ago, the European Union considered halting aid to the Palestinian Authority based on its negative portrayals of Israelis in its textbooks.

As recently as last year, the Washington Jewish Week reported on a dispute over whether Palestinian textbooks call Israelis pigs and snakes. Over the past decade, the Israeli government, the State Department and independent groups have produced wildly varying reports on the contents of Palestinian textbooks.

The new study examined 94 books from Palestinian school systems in Gaza and the West Bank, and 74 books from the Israeli secular and religious school systems. There were just 20 instances of “extreme negative characterizations” of Palestinians in Israeli secular books and seven in Israeli ultra-Orthodox books, according to the study. One such example in an ultra-Orthodox book referred to a decimated Arab village, now the site of an Israeli settlement, as “a nest of murderers.”

Palestinian books had just six instances of these “extreme negative characterizations.” For instance, one book referred to an Israeli interrogation room as a “slaughterhouse.”

These characterizations, however, were extremely rare and statistically insignificant.

Until I see the actual report (not yet on the webpage of the organization that created it) or can see the actual textbooks I cannot say for certain that this report is wrong. I can say quite definitively that in the Palestinian Arab media, the idea of a peaceful two-state solution providing two states for two peoples is virtually nonexistent.

Israel’s Ministry of Strategic Affairs came out with a response (not sure it is is online.) Here are some highlights:

The « Victims of Our Own Narratives » study on Israeli and Palestinian school books correctly recognizes that education towards a culture of peace, and the cessation of incitement, are critical elements in achieving an Israeli-Palestinian peace. However, the report is highly-problematic and strongly-misleading for five reasons:

1. The overall approach and tone of the study reflect an attempt to present an artificial and inaccurate picture of balance between the levels of incitement and peace culture development in Palestinian and Israeli textbooks. In reality, there can be no comparison between Israeli state textbooks, which, while not perfect, educate for peace, and Palestinian textbooks which are pervaded by incitement, delegitimization of Israel, and education for the continuation of conflict. While the actual findings of the study do indeed point to the very significant differences between official Israeli and Palestinian books, and the widespread incitement in the latter, in order to create the impression of balance the study understates and obscures its findings, presents results in a misleading manner, , provides excuses for the Palestinians, and couches its analysis in general terms which take as a given parallels and similarities between the educational systems.

2. The study omits important examples of incitement and delegitimization of Israelis and Jews in official PA textbooks, whether in an intentional attempt to blur the differences between the two educational systems or due to poor research. At the same time, it categorizes as negatives examples from Israeli textbooks which do not deserve to be described as such.

3. Its methodology is flawed in that it misses or obscures critical differences between Israeli and Palestinian texts. For example, if one examines the examples categorized as negative descriptions of the acts of the other, one finds that while the Israeli examples primarily refer to pogroms and terrorist attacks against Israelis and Jews, such as the 1941 Farhud pogrom in Iraq and PLO terrorist attacks, many of the Palestinian examples describe Zionism and the foundation/existence of Israel as essentially illegitimate and immoral. Inculcating the message that Israel’s existence is essentially illegitimate makes any kind of progress towards an end of the conflict and lasting peace impossible. Similarly, the study finds that in both Israeli and Palestinian textbooks martyrdom through self-sacrifice is the third most common value attributed to the self-community. This obscures the fact that the Palestinian examples glorify martyrdom while perpetuating acts against Israelis, while the Israeli examples describe historical victims of such attacks (Joseph Trumpeldor’s death at the Tel Hai fortress in 1920.)

4. The report provides a misleading picture regarding its sponsors. The report states that the study received funding from the US State Department, creating the impression of official US support for the study. While the project did receive a State Department grant in 2008, the US government had no involvement with the methodology or findings of the study and has not lent its support to the actual report. Additionally the authors of the report attempt to provide it with an aura of respectability and authority by noting that it was commissioned by the ‘Council of Religious Institutions of the Holy Land’. This too is misleading as the Jewish representative on the Council, the Israeli Chief Rabbinate, has retracted its support for the study. It should also be noted that the Palestinian representatives on the council, the PA Minister of Religious Affairs and the Chief Justice of the PA Sharia Courts, have themselves made publically-documented statements of incitement and delegitimization against Israel on a number of occasions, including denying the Jewish connection to the Western Wall. (see Appendix 1 for examples).

5. Perhaps most importantly- The study provides a highly-flawed and distorted depiction of the PA’s systematic efforts to educate and indoctrinate Palestinian children to hate, violence and non-acceptance of Israel’s existence. This is a result of the fact that the study focuses only on a very specific and limited component of those efforts. In addition to the material included in school books, official PA educational publications, matriculation exams, summer camps, children’s media programs, cultural events and social media portals, all constitute key components of the PA system for inculcating messages which glorify terror, demonize Israelis and Jews, and teach that Israel’s existence is illegitimate and transitory. Information regarding incitement in these other educational and youth-oriented arenas and platforms is readily available in the public domain. While the study’s authors can perhaps justify these omissions by the narrow mandate given to the study, the inaccurate and misleading picture which results strongly compromises the study’s utility as an investigation into the phenomenon of education for peace/conflict and its potential solutions.

Then they give specific examples:

The following examples of incitement are not included in the study. They are either from school textbooks which presumably were examined by the researches, who chose to omit the examples, from textbooks which were not examined by the researches due to their subject matter (e.g. mathematics or natural sciences ), or from other publications, outlets and platforms which make up key elements of the PA apparatus for educating and indoctrinating Palestinian youth.
It must be noted that the following examples constitute a very small sample of the hundreds of examples of official PA incitement.
1. The dispute with Israel is not over territory, but over the legitimacy of Israel’s existence, let alone Israel’s existence of a Jewish state.
i. “The Levant countries [Al-Sham] presently consist of the states of Palestine, Jordan, Lebanon and Syria.” [History of Ancient Civilizations textbook, Grade 5, (2012), p. 27]
ii. In a 2012 book for 3rd graders, a text referring to the Palestinian state is accompanied by a small map of the country in its entirety—including pre-1967 Israel—shown as one political unit covered by a pattern of the Palestinian flag. The text asks « An independent Palestinian state was declared in 1988. How many years have passed since the declaration of independence? » [Mathematics, Grade 3, Part 1 (2012(, p. 80.] 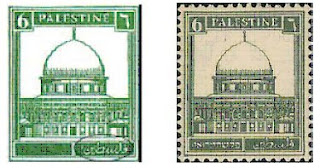 iii. PA textbooks falsify historical documents in order to erase and deny the Jewish connection to the land. The front cover of the National Education textbook for second grade portrays a British Mandate-era stamp in which the original Hebrew writing has been erased leaving only the Arabic.
Stamp as portrayed on front page (and again on page 7) of Grade 2 National Education textbook (part 1, 2009), and actual stamp:

iv. PA textbooks inculcate messages of non-acceptance of the other even when discussing seemingly innocuous topics. This education begins as early as first grade. In a first grade science textbook, a discussion of magnifying glasses includes the following image of a magnifying glass over a text reading « Palestine is Arabic. » [Science, grade 1, Part 1, (2010), page 7]

source : The elder of Zyion