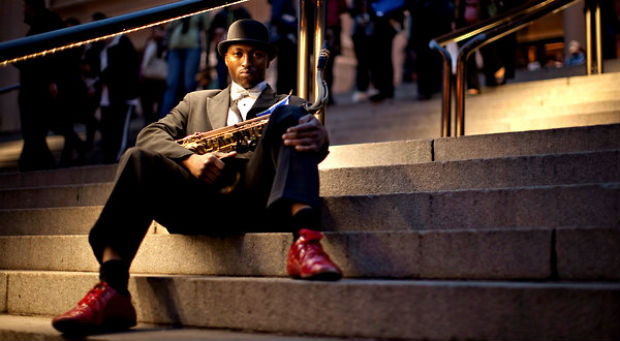 This guy was at the Times Square station playing non-stop traditional Jewish music. This was one of those « only in NY » moments. A black sax player performing Jewish songs.
If anyone is interested in finding this guy to talk to him, he can usually be found at the 42nd St-Times Square station, at the uptown 1-2-3 platform, towards the front of the platform.

An article about him :

The musician, Isaiah Richardson Jr., 32, starts with some grandstanding — running, leaping and dancing while playing pop tunes — as a general crowd pleaser. Then comes his main repertory: anthems and tunes from dozens of countries.

“Nothing works like playing something that people know,” said Mr. Richardson, who can play the national anthems of 50 countries and keeps a set of miniature national flags to wave and display as he performs them.

He has become sharp at spotting nationalities, and like an expert fly-fisherman, can cast the appropriate song before a particular group of museumgoers who then tend to burst out in amazed laughter and pull out their cameras and a few bucks for Mr. Richardson.

“It’s the element of surprise,” he said. “They think I’m some street musician and suddenly I start playing their anthem.”

Mr. Richardson says he learned much of his international repertory while playing clarinet in the United States Marine Corps band for four years, traveling all over the world. After that, he studied music and language extensively in China, Japan, Taiwan and Korea, he said. This, for example, is how he learned to play the  Taiwanese national anthem, which he performs in the subway in New York, videos of which became widely viewed in Taiwan.

Mr. Richardson grew up in the Bronx and began playing the clarinet at age 11 and was soon taking lessons at the Juilliard School. He attended the Fiorello H. La Guardia High School of Music and Art and Performing Arts, and studied jazz performance and Asian studies at City College in Harlem. His experience working as a clown and magician, and as a competitive salsa dancer, all feed his eclectic performing style, as does his love for Asian cultures.

“My father wanted me to be a martial-arts master, and he had me eating with chopsticks and visiting Chinatown on the weekends,” he said. “It must have rubbed off.”

Mr. Richardson’s girlfriend is a jazz saxophonist from Japan, and most of his friends in New York are Japanese, including some members of his Brooklyn-based band Brown Rice Family. After nighttime gigs and late-night jam sessions, he often heads to a subway station at dawn to play the morning rush.

But nowhere is the money better than on the museum steps. Mr. Richardson said he earned an average of $100 an hour in tips in decent weather. Sure, there are mishaps, like the dents in his saxophone from all that jumping around. And two years ago, all of his instruments were stolen while he was in a sake-induced slumber on an uptown No. 2 train.

Marching with the Marine Corps band helped him develop his physical style of playing, which includes leaping and maneuvering his horn like a ceremonial rifle.

Typically, Mr. Richardson follows a doo-wop group that works the spot earlier in the day, and he often battles a hip-hop dance group for the coveted location.

On Wednesday, he played a set of Jewish songs — learned while studying klezmer music on the clarinet — for two Israeli families who tipped him well. Just before the museum’s 5:30 p.m. closing, Mr. Richardson sucked down an energy drink and watched the crowd pour down the steps like cash out of a slot machine.

He stopped the flow with a spirited medley of pop tunes culminating with his signature,  “Beat It” by Michael Jackson.

But with groups of Japanese students gathering, and a Chinese tour bus idling nearby, it soon became time for the international songs. He seized his Japanese flag, waved it overhead and then stuck it in his breast pocket. He gave a sharp military salute and launched into an old Japanese pop song. A young man ran over and threw $10 into Mr. Richardson’s suitcase. After 90 minutes, he had made $250, including $50 from a Korean businessman.

His earning power, he emphasized, comes from years of study and the practice of hundreds of songs.

“If you make a mistake on someone’s national anthem, it’s an insult, so you have to know them perfectly,” he said, adding that one anthem that does not make money is the United States’s own.

“Take a look,” he said gesturing to the steps. “How many Americans do you see?”