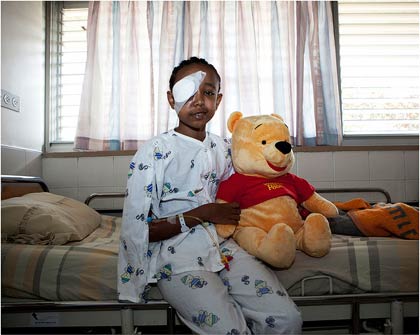 When the seven-person crew from the Israeli volunteer organization Eye from Zion arrived in a remote region in Ethiopia in February to provide free cataract surgery, they were expecting several dozen patients. Instead, hordes of adults and children were waiting to receive the life-changing operation. And one young girl with a protruding eye was given a very special gift –– a medical trip to Israel

Using its proprietary mobile unit that encases the patient’s head in a sterile environment, Eye from Zion has already performed the 20-minute procedure on thousands of people in Asian and African countries. This time, the organization was asked by the Israel Ministry of Foreign Affairs to pay a visit to northern Ethiopia because so many people there are blinded by cataracts.

Confronted with the unexpected mass of people, Eye from Zion founder Nati Marcus decided he would send no one away if he thought they could be helped. “They told us 70, and when we arrived there were 1,400 waiting for us. We sent 400 away immediately because there was nothing we could do — some even had no eyes. But we knew there were about 1,000 we could help.”

After an initial 170 operations in the regions of Debark and Gondar, plus training for a local nurse who had taken it upon herself to perform cataract operations, Marcus planned to return with another team of four eye doctors, a couple of nurses and a technician over the course of the year to finish the job for those on the waiting list.

On March 17, a crew led by Prof. Dov Weinberger, head of ophthalmology at Rabin Medical Center, flew over with representatives from the American Jewish Joint Distribution Committee (JDC), which has on-the-ground staff in Ethiopia.
“One thousand is an unbelievable number,” Marcus says. “We worked from morning to night with a local doctor from Ethiopia who helped us in the mobile operating room.”

Marcus, a retired businessman, invented this unique surgical setup to overcome the problem of operating in remote locations. The contents of the unit were donated by Sheba Medical Center in Tel Hashomer after Marcus founded Eye from Zion four years ago in order to share Israeli medical expertise and training to people in developing areas.

A mission for a special girl

Supported by MASHAV, Israel’s Agency for International Development Cooperation, the Foreign Ministry and volunteer medical personnel, as well as donations, Eye from Zion also enables doctors from around the world to network and share techniques that can advance medical treatment for improving sight in the developing world.

Marcus always hopes that people who benefit from the training and the treatment will go on to become goodwill ambassadors for Israel and the Jewish people.

One of those potential ambassadors is only 10 years old — a girl named Kavda Imsak who underwent preliminary surgery in Ethiopia to remove a tumor behind her eye. Marcus and the Eye from Zion volunteer physicians insisted she be brought to Israel for further treatment since the tumor had pushed her eye out grotesquely. The JDC financed Kavda’s trip to Tel Hashomer as well as her treatment and hospital stay.

“Everyone said, ‘You are stupid to bring this girl to Israel. She will die there.’ And I said, ‘No, we are going to save her life,’” Marcus recalls. “She is now recovering. In one month she will undergo some plastic surgery and will get a glass eye. And she is going to recover and we are going to send her home.”

Marcus insists that no one at Eye from Zion receive any money for their services. “We have zero overhead,” he says. “We are going to the most rural areas with our mobile operating room. We can even carry it to the mountains. It is something very special.”