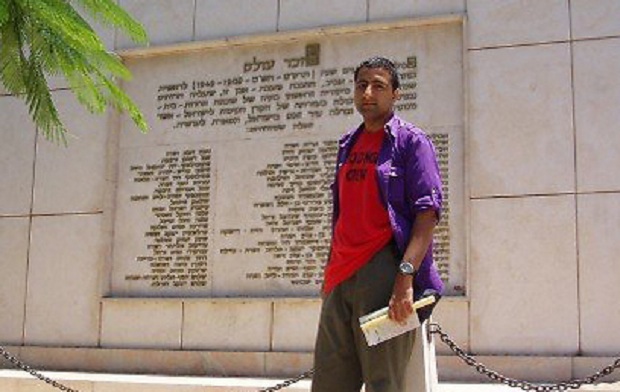 I am a Zionist, a proud Muslim Zionist, and I love Israel, but this was not always the case. In fact, for many years I was quite the extreme opposite. I experienced the high levels of anti-Semitismand anti-Israel activity taking place on British university campuses, because I was the anti-Semitic, anti-Israel activist.

Growing up in the Muslim community in the UK I was exposed to materials and opinions at best condemning Israel, painting Jews as usurpers and murderers, and at worse calling for the wholesale destruction of the « Zionist Entity » and all Jews. In short, there was no accommodating a Jewish State in the Middle East.

To grow up around this constant barrage of hatred directed at Israel has a massive effect on an individual’s own opinions. More disturbingly, many of these people weren’t radical or extreme, but when it was about Israel the most vicious of rhetoric poured out, coupled with the casual anti-Semitism that seemed too prevalent, when the phrase « stop being a Jew » used as an insult.

My father, however, was much more brazen in his hatred, boasting of how Adolf Hitler was a hero, his only failing being that he didn’t kill enough Jews.

By the time I had reached 18 I was completely indoctrinated to the fold of radical Islamism. My hate for Israel and for the Jews was fuelled by images of death and destruction, set to the backdrop of Arabic melodies about Jihad and speeches ofHezbollah leader Hassan Nasrallah or Osama Bin Laden.

These views were reinforced when I attended Nakba Day rallies, where speakers predicted Israel’s demise as Hezbollah flags were waved proudly in the centre of London.

The Case for Israel

Was there a case for Israel? In my mind, of course not, there was no shadow of doubt. Even the most moderate clerics I came across refused to condemn terrorism against Israel as unjustified; the Jews must obviously deserve it, I believed.

So what changed? How could I go from all this hatred to the great love for and affinity with Israel and the Jewish people? I found myself in the Israel and Palestine section of a local bookstore and picked up a copy of Alan Dershowitz’s The Case for Israel. Given my worldview, the Jews and Americans controlled the media, so after brief look at the back, I scoffed thinking « vile Zionist propaganda. »

I did, however, decide to buy it, content that I would shortly be deconstructing this propaganda piece, showing that Israel had no case and claiming my findings as a personal victory for the Palestinian cause.

As I read Dershowitz’s arguments and deconstruction of many lies I saw as unquestionable truths, I searched despairingly for counter arguments, but found more hollow rhetoric that I’d believed for many years. I felt a real crisis of conscience, and thus began a period of unbiased research. Up until that point I had not been exposed to anything remotely positive about Israel.

Now, I didn’t know what to believe. I’d blindly followed others for so long, yet here I was questioning whether I had been wrong. I reached a point where I felt I had no other choice but to see Israel for myself; only that way I’d really know the truth. At the risk of sounding cliché, it was a life-changing visit.

I did not encounter an apartheid racist state, but rather, quite the opposite. I was confronted by synagogues, mosques and churches, by Jews and Arabs living together, by minorities playing huge parts in all areas of Israeli life, from the military to the judiciary. It was shocking and eye-opening. This wasn’t the evil Zionist Israel that I had been told about.

After much soul searching, I knew what I had once believed was wrong. I had been confronted with the truth and had to accept it. But I had a bigger question to confront, what now? I’d for years campaigned against Israel, but now I knew the truth.

The choice was obvious: I had to stand with Israel, with this tiny nation, free, democratic, making huge strides in medicine, research and development, yet the victim of the same lies and hatred that nearly consumed me.

Doing this is not easy and that’s something that has become very obvious. I have faced hostility from my own community and even some within the Jewish community in the UK, but that’s the reality of standing up for Israel in Europe today. It is not easy, and that’s what makes it so necessary.

This isn’t about religion and politics; it’s about the truth.

When it comes to Israel, the truth is not being heard, the ranks of those filed with blind hatred continue to swell, yet many have not been exposed to the reality, away from the empty rhetoric and politically charged slogans they are so fond of.

We can change this situation but we need to be strong and united. Israel is not just a Jewish issue – it’s about freedom, human rights and democracy, all the values that Western nations cherish. It’s also about trying to be a light among nations.

Israel’s international humanitarian aid work speaks for itself, but if we don’t get the message out there, no one will. We don’t have to be head-bowed apologists leading with :Israel’s not perfect… » – we should never be afraid to say: I am a Zionist and I’m proud. I stand with Israel. Now I ask, will you do that?

Kasim Hafeez is a British Muslim and former Islamist who is now a proud Zionist and stands with Israel. He runswww.theisraelcampaign.org and has a blog on this site. He is also on the advisory board of StandWithUs in the UK and recently completed a university speaking tour