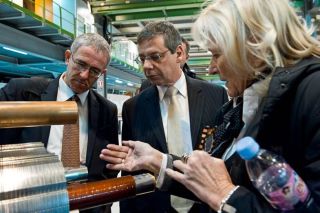 Danny Ayalon : I just had a great visit and tour of CERN, the European Organization for Nuclear Research, where Israel is set to become the first non-European member. (NDLR)

Physicists from around the world kicked off a major initiative on Wednesday to upgrade the Large Hadron Collider (LHC) at CERN — the world’s leading laboratory for particle physics — into a vastly more powerful space research machine by 2020.

The work brings together scientists and engineers from some 14 European institutions, Japan and the United States, with the goal of developing new technologies in fields ranging from super-conducting magnets to energy transfer lines.

While the LHC already delivers the highest luminosity beams of any high-energy proton accelerator in the world, the upgrade will increase the number of collisions, or luminosity, by up to a factor of ten — something vitally important for physicists seeking to study extremely rare processes.

“With the LHC colliding hundreds of millions of particles each second, some of the processes we’re interested in will happen just a few times a day” said CERN Research Director Sergio Bertolucci.

“With processes so rare, extra luminosity makes a big difference to our ability to make precision measurements and discover new things,” he said.

Luminosity is a measure of the brightness of the beams, so the collision rate in a particle accelerator gives an indication of its performance.

According to officials with CERN — the European Organization for Nuclear Research – the upgrade will ultimately help scientists gain deeper insight into the origins and make-up of the universe.

This week’s workshop kicks off the initial design phase of the project, which aims to take the LHC’s luminosity to a factor of 5-10 above its current design value.

It draws on expertise from around the world, bringing together scientists from the well-established CERN-KEK collaboration and U.S.-based LHC Accelerator Research Program (LARP) with a new European Design Study network supported under FP7.

“We have set up a collaboration in which all partners are involved at the same level,” said High Luminosity LHC project coordinator, Lucio Rossi.

“While we were building and commissioning the LHC, LARP and KEK were developing new technologies for the next generation magnets. Their research and development activities will be key to our success.”

“All these new technologies require further study but the project’s partners have the necessary know-how to successfully develop them,” said Rossi.

“At the kick-off meeting we will synchronize our work to increase synergies among the partners, touching base on what has been done so far and define future milestones.”

Anyone wishing to get involved with the High Luminosity LHC study can do so through the volunteer computing project, [email protected]: http://cern.ch/LHCathome/.

CERN, the European Organization for Nuclear Research, is the world’s leading laboratory for particle physics, is headquartered in Geneva. At present, member states include Austria, Belgium, Bulgaria, the Czech Republic, Denmark, Finland, France, Germany, Greece, Hungary, Italy, the Netherlands, Norway, Poland, Portugal, Slovakia, Spain, Sweden, Switzerland and the United Kingdom. Romania is a candidate for accession. Israel is an Associate Member in the pre-stage to Membership.

India, Japan, the Russian Federation, the United States of America, Turkey, the European Commission and UNESCO have Observer status.