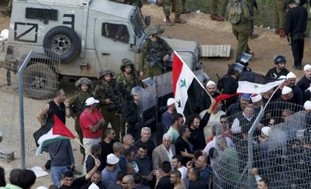 Expert says details surrounding Nakba Day infiltration of border still unknown, but Israel will have to explain its actions.

Dr. Daphne Richmond-Barak, an expert in international law from the Herzliya Interdisciplinary Center, said Sunday that the breach of the Israeli border by Syrian protesters was an unprecedented act in modern history and a clear violation of Israeli sovereignty as determined by article 51 of the United Nations Charter.

At the same time, she said, firing on civilians was also a breach of international law and that once the details of the event were made clear, it would be required of Israel to explain its actions.

“Most of the details surrounding the shooting are not yet known. Important considerations are whether the protesters were armed or not, whether they were an organized association of a para-military nature, whether the soldiers who fired felt they were in immediate danger and shot out of self defense and a series of other possibilities that are too vague to judge,” said Richmond-Barak.

She added that while there were legal questions to be considered, the most urgent concern was a deterioration of the diplomatic relations between the countries.

“We must remember the current situation in Syria, where there is an absence of law and order because of the popular uprising against [Syrian President Bashar] Assad. It is conceivable that the guards who were supposed to man the border on the Syrian side were not at their posts because of the uprising,” she said.

She added that the uncertainty in Syria could be a mitigating factor enabling the soldiers to shoot at the protesters, but stressed that it was completely illegal for anyone to order the firing on unarmed civilians. Other factors that need to be considered are, the number of people who attempted to cross and the manner in which they did so.

"If we were talking about tanks and soldiers, there would be no question about Israel's right to shoot as an act of protecting its sovereignty. This case however is different," said Richmond-Barak. “In this case, there may have been other options open to the soldiers, like arresting or stopping the protesters in less violent ways.”

“The laws of war are not the appropriate frame work for judging the events in the north. We are not talking about an attack by an invading army. It would be more appropriate to look to the US’s actions against Mexican infiltrators on its southern border to learn about legitimate use of force,” said Professor Asa Kasher, one of the authors of the IDF’s code of ethics.

Dr. Assaf Moghadem an IDC expert on counter terrorism, told The Jerusalem Post that he believed that Assad himself was behind the breach, taking action directed at reducing pressure from himself.

“What could be better for Assad than diverting the people’s anger from himself towards Israel. I wouldn’t put it beyond the range of the possible that he recruited people to cross the border in order to shift the pressure to Israel,” said Moghadem.

Moghadem said that it was less likely that Hamas in Syria was behind the actions. He said that despite the fact that Hamas enjoyed support of the Syrian administration, their control of Gaza suggested that if they wanted to take action against Israel it would be from the Strip and not from the Syrian border.

Richmond-Barak said she could not recall another incident in recent history in  which a border between two sovereign states was breached in such a manner.

Moghadem painted a scenario in which the breach and Israel's response to it could lead to an all out war between the countries. "I don't want to be an alarmist, but this event does have the potential to spiral out of control, depending on Israel's reactions and the response of the international community. It is incumbent on Israel to show restraint."

Asked whether a border infringement on the Syrian front was an eventuality anticipated by Israel, Moghadem said that in light of all the goings on across the Middle East, a breach from the North was likely low down on the probability scale.

Moghadem added that even if the breach was indeed coordinated by the Assad regime, it would not necessarily work in his favor.

"As we have seen in recent weeks and months, the Arab's public  views on their ruling regime's actions is more critical than was previously given credit for. There will assuredly be Syrians who recognize Assad's diversionary tactic  for what it is and call him on it," said Moghadem.