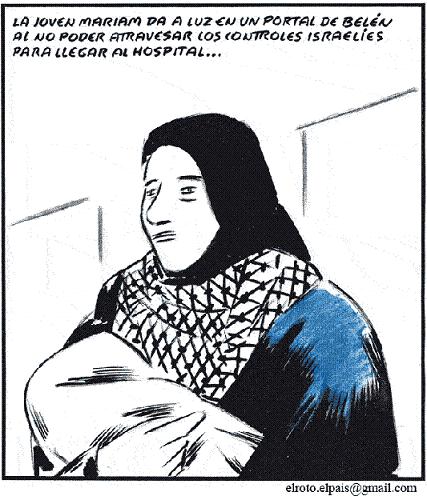 In the Christmas edition of his cartoon posted on December 24, 2010 in the newspaper El País, the cartoonist El Roto used the occasion to feature classical anti-Semitic elements aimed to confuse, misinform and demonize the State of Israel

The cartoon shows a Palestinian woman wearing a headscarf identified by the cartoonist as “Mariam”, obliged to give birth in a Bethlehem doorway due to Israeli security checkpoints. The security wall can be glimpsed in the background. The woman carries a baby in her arms, which we might conjecture is the ‘modern day Jesus Christ”.

This sample of “graphic wit” contains a number of dangerous misconceptions, which confuses the alleged historicity while also carrying a clearly anti-Semitic message:

• The parallel images advanced by El Roto can be placed in the context of a new trend whose purpose is to offer confusing messages concerning the origin of the Jewish presence in the Middle East, in other words, the Jews’ right to the land, which therefore delegitimizes the State of Israel. According to this type of highly tendentious propaganda, Jesus was a Palestinian. Following this line of thought, El Roto has drawn “Mariam” as a modern day Palestinian. It is worth remembering that Jesus, Mary (“Mariam” in the cartoon) and Joseph were Jewish. There were no Palestinians at that time. The region was known as Judea and had been known as such for two centuries before Jesus and in fact, up until 1946. The term Palestine was coined by the Romans as a means to combat Jewish nationalism.

• A second point to remark is the use of Christian iconography, with the image of the “modern Jesus” beleaguered and surrounded by an “Israeli occupier”, in a clear reference to the concept of a god-killing people, the accusation devised by the Catholic church and used against the Jewish people and which is so central in historical anti-Semitism. Vatican II tried to put an end to such seeds of Judeophobia, retracting its old statement in Nostra Aetate. In fact, according to a definition adopted in 2005 by the European Union Agency for Fundamental Rights (FRA) and the Organization for Security and Cooperation in Europe (OSCE), the use of symbols and images associated with classical anti-Semitism (for example, accusing the Jews of having killed Jesus, or the blood libels) when depicting Israel or Israelis is an unequivocal sign of anti-Semitism. However, as we can see in this cartoon by El Roto, the recurrence of imagery where Jesus (or a contemporary version) is a victim of the Jews (or Israel, in its current representation of the people) is still quite present in many cartoons emanating from the Spanish press.

• It is true that Bethlehem is under Israeli control. The security fence was built following a wave of terrorist violence which spiked in the wake of the so-called Second Intifada. Its sole purpose was to save lives and obviously not to impede pregnant Palestinian women from having access to hospitals. As of September 2000, over 1100 people had been assassinated by Palestinian terrorists. This death rate fell abruptly with the construction of the security fence. This doesn’t represent a border, nor is it a means to expand the settlements (as was recently ratified by current diplomacy), and the wall itself only occupies about 5% of the fence, in places where it is necessary to prevent shooting by Palestinian sharpshooters.

• The cartoon is a projection of the Palestinian victim role, which evokes so much international concern, but it doesn’t reflect the reality of Bethlehem which is experiencing a real economic boom. If El Roto had full knowledge about the real Bethlehem, perhaps he would have depicted this nativity interdict in another way, with “Mariam” having to give birth in a doorway in the impossibility of finding any free hotel rooms during the Christmas season, due to the seasonal tourist invasion.

• Since we’re talking about problems in Bethlehem and victimhood, El Roto fails to see that it isn’t a generic Palestinian people who suffer segregation at the hand of the Israelis but rather the local Christians at the hands of the Muslims. Just recently, various Middle Eastern Bishops declared the situation in the Palestinian Territories to be “unsustainable” because political Islam “imposes an Islamic lifestyle on all of its citizens, sometimes by using violence”. As the Journalist Henrique Cymerman noted in his article in the Vanguardia (Sonrisas y lágrima en Belén), in 1947 Christian made up 35% of the population while today they are barely 3%-4% in the Palestinian areas. In 2007 CAMERA analyst Alex Safian wrote an article that analyzed certain media errors concerning the facts surrounding Christian Palestinians. In the same vein, Daniel Pipes in 2005 predicted the death of Christianity in the land of its birth, with a complicit silence by the Christian world.

Despite this evidence, El Roto has chosen to prosecute a campaign to defame Israel by jumbling the historical facts, the current realities and the facts of survival by transmitting an image of Israel as the aggressor and feigning ignorance about the nature of Palestinian rights. It is not surprising given the track record of this cartoonist in El Pais, who has never lost an opportunity to condemn the Jewish State with arguments considered anti-Semitic by the European Union Agency for Fundamental Rights (FRA) and the Organization for Security and Co-operation in Europe, which includes the banalization of the Holocaust or comparing actions by the State of Israel to Nazi policies.

It is therefore extremely important that a newspaper such as EL PAIS, a reference in the Spanish speaking world, should apply more newsworthy diligence when publishing cartoons which offer a confusing view of the reality and which collaborate in fomenting a hostile climate for Israel and for the Jews.

5 thoughts on “In Spain, El Roto and El País Offer Readers a Distorted View of History” 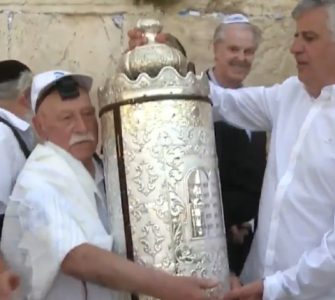